Why winter tires are the best choice for severe winter weather 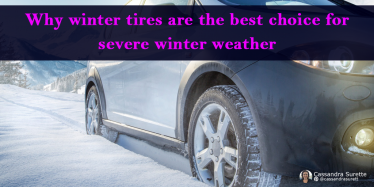 Winter tires are the best choice for severe winter weather because these tires actually are made especially for the winter season.  Whether choosing studded or non-studded tires winter tires come with the “Three Peak Mountain Snowflake” emblem signifying that the tires meet required performance criteria in snow testing thereby considered severe snow service rated. This means that these tires are made specially to handle severe winter weather and go through vigorous snow testing to make sure they maintain traction on snowy, slippery roads in low and below freezing temperatures.

The general indications for winter tires are when the temperature drops near freezing. With studded tires this becomes more complicated as each state in the United States has different laws for their use. There are some States that allow their use as early as September while others not at all. There are also some States only allowing rubber studs while others allow both metal and rubber studs. Winter tires will improve traction, braking and handling, with today’s winter tires not being designed to perform just in snowy conditions, but perform better on cold, dry pavement as well. The big drawback with winter tires however is the need to change tires once the winter season is over. This is because the winter tires are not made to be used in other seasons but winter and in some States, it is even illegal, especially for studded tires.

When choosing winter tires make sure to consider your driving needs. Do you drive on icy or snowy roads? Do you drive early morning or late at night? Do you maintain the same speed regardless of temperature? If the area where you live has mild winters, then maybe all weather tires would suffice. Winter tires are the ultimate choice for severe winter conditions and give the ultimate performance on both snow and ice, studded tires, even more so. In certain areas in the United States it is the safest choice to equip your car with dedicated winter tires for the winter season. When to put them on depends on where in the United States you live. Check your local laws before changing into winter tires, especially studded tires as they are not allowed in all States.